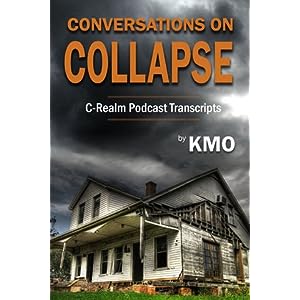 When I started the C-Realm Podcast, I was a confirmed Singularitarian and Libertarian (in the contemporary American sense of that word). I thought that the accelerating evolution of technology incubated in the nourishing environment of the Free Market would create a human paradise in the blink of an eye. I was concerned that said blink of the eye might be a few decades away, but I was pretty sure we'd get there.

Then I started talking to people like Dmitry Orlov, who understands computers and understands just how stupid they are and how out of touch with reality we must be to place our hopes for a bright future in anything so devoid of understanding and good sense.

I talked to Albert K. Bates, who seemed a lot more cogent in his assessment of human-induced climate chaos than the folks at the Cato Institute who once seemed like the very embodiment of clear-headedness to me. Albert invited me to visit the Ecovillage Training Center where I not only saw, but inhabited a more sensible alternative to growth-dependent industrial civilization.

I spoke with Thomas Homer-Dixon, who explained how debilitating even a temporary loss of the power grid and internet can be, and how, in a world as interconnected and interdependent as ours has become, failures in seemingly insignificant systems can spread and turn a series of small breakdowns into a systemic catastrophe. He also described a set of converging stresses that will continue to intensify and push our hyper-complex society toward the brink of collapse.

I spoke with Albert A. Bartlett about the inevitable Malthusian Correction that will result from the practice of using land and sunlight to turn petroleum into food, and ultimately, into more and more people. He has a simple math lesson for non-scientists with good hearts and PhDs that exposes their conditioned expectations about the path to a brighter tomorrow as quixotic fantasies.

I spoke with James Howard Kunstler about the fact that our pyschology of previous investment keeps us committed to an environment built for the convenience of cars. In his words, we have dedicated ourselves to a future that has no future.

The cheap and readily available energy we get from petroleum powers the hyper-complexity that we have learned to take for granted. It is that essentially free energy that allows us to live the way we do, and it is the diminishing availability of that energy that will keep us from living this way in the future.

I spoke with Sharon Astyk who explained the benefits of normal human poverty. When industrial agriculture can no longer feed us we have to feed ourselves. When we do that, the food is better. There may be less of it at first, and it will certainly require more human attention and labor to produce it. That means we will have to share more and depend on each other more, but sharing and helping one another actually makes us happier than the isolation and seeming independence that the petroleum powered lifestyle affords us.

When I spoke with Cornelia Butler Flora, she explained the difference between standard of living and quality of life. An increased standard of living means having more stuff, more personal space, and control of more assets. This is what petroleum-powered civilization has given us. Quality of life comes from having our basic physical needs met and then, increasingly, from a sense of inclusion. We feel good about ourselves and our lives when we think that the people in our communities value us for who we are and what we do and not for what we have.

Bill McKibben provided more encouraging news when I spoke with him. The 20th Century showed us what doesn't work. Huge, centrally-planned economies don't work. Conversely, everyone doing what they want without regard for their neighbors and their communities doesn't work, but now people are discovering what does work. People are discovering farmer's markets which provide not only food but a rewarding social experience. People are experimenting with co-housing and other new living arrangements that preserve individual autonomy while accessing the benefits of cooperation and community.

Colin Tudge explained that we can not only feed six billion people without industrial agriculture but that feeding people is easy. When we make enlightened use of techniques that have proven themselves for millenia and combine them with the best of what science and technology has to offer, then we can raise everyone to the highest standard of nutrition and gastronomy.

Finally, Joe Bageant told me how to see one seeming short-coming of the high-tech, imperial project as a blessing. This style of living that most first-world residents consider non-negotiable has left out two thirds of the world's population. Those people have had to make do on a lot less, and we can learn from them. He is careful not to present the third world as a paradise or its inhabitants as morally superior, but there are places left where sons still admire their fathers and people derive satisfaction from using their own competence and the cooperation of their neighbors to provide for their basic needs. And we can learn from them.

If you resonate with this narrative, then I would encourage you to partake of it more fully. Conversations on Collapse: C-Realm Podcast Transcripts is available available from Amazon.com, and it's author is available for public appearances.
Posted by Unknown at 9:01 AM

KMO-you gone from a world of magical thinking, to actually interviewing guests with chewy and reality based ideas.
I had given up on your podcasts.

I attended your gathering in San Francisco last year, and was dismayed with the lack of basic knowledge of basic thermodynamics and evolutionary biology, and the widespread magical thinking that those tools would have easily nipped in the bud (your friend Eric was the exception).
You seem to be progressing out of your adolescent libertarian phase, and exploring the deep end of the pool.
Thanks, evolution is a good thing.

Much Love to you Kmo.

Please help the peaceful protesters at Occupy Wall Street! We need you KMO!!!